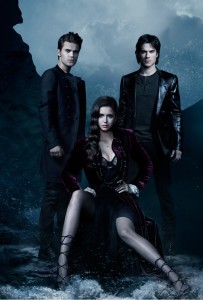 The Vampire Diaries is an amazing TV Show! I am really curious about who Elena will end up with. Stephan and Damon are such cute guys. She is lucky to have such sweet and hot guys interested in her.

“The Vampire Diaries” is a TV Show that tells the story of Elena, Stephan and Damon. A love triangle between a human girl and two vampires. In the beginning of the storyElena meets Stephan and she falls in love with him. She finds out he is a vampire and though that scares her a little bit the love she feels for Stephan is stronger. She loves him and decides to keep being by his side.

Later on she meets Damon, Stephan’s brother and she doesn’t like him at first. She sees him as a rude guy that just cares about himself. He is in love with Katherine, a vampire that he is looking for since 100 years. When he finds her though he finds out that for her, Stephan was always more important than him.
He has his heart broken but soon he falls for Elena and then the battle for Elena’s heart begin. Damon starts to get close to Elena and she starts also to feel attracted to him. She and Stephan break up later on and when Elenabecomes a vampire she and Damon start a relationship!

The thing is that human Elena loves Stephan but vampire Elena loves Damon. For me I think Elena should be with Stephan and Katherine with Damon because they are more alike. Damon waited 100 years to be with Katherine and in the end he found out that she cared more about Stephan I wish she could had change her mind. They would be a good match.

On this 6th serie Elena loves Damon but if she becomes human again will it change her love feelings for Damon and Stephan? It is supposed to be Stephan the main character and usually is the main character who gets the girl. Maybe in this story is different.

This Serie is also interesting because it doesn’t have only vampires. It also has werewolves, witches, people who die that comes to life…

The main question though is what will be Elena’s future? Stephan or Damon? Let’s wait and see!

I love to write about love. Whenever I feel inspired I tend to write poems. I love to watch movies also.