Could There Be a 140 Million Year Old Hammer?

Hammers are a popular tool in homes and on construction sites up and down the country. Today you can choose from a cheap and simple hammer for everyday tasks through to indestructible handle hammers, such as sledgehammers. However, the first hammers were much more basic than these and generally consisted of a wooden handle attached to a piece of stone. In the 1930s a hammer was discovered in rocks dating back 140 million years. Is this the earliest hammer ever found or could there be another explanation for the discovery? 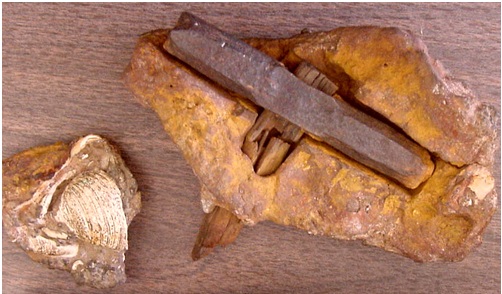 The discovery of a 140 million year old hammer

The ferrous hammer was found in 1934 by Max Hahn in Texas. Originally, Hahn believed that the rock had a bit of a stick protruding out of it. It wasn’t split in two for over 10 years and it was at this point that the hammer was found to be inside the rock. This exposed the 15cm long hammer, which had a handle made from wood. Over the years encased in the rock, the hammer had undergone partial petrifaction.

Surveys that have been carried out on the section of rocks where the discovery was made dated them to the lower cretaceous period. This was a period in time over 140 million years ago, during the age of the dinosaurs. Most scientists believe that it was highly unlikely that this hammer could have actually been made at this time and that there is likely to be a logical reason why the hammer became encased in the rocks.

Experts are undecided as to the actual age of the hammer. Some believe that it can be no more than 700 years old, due to the nature of the materials. One possible explanation is that it became deposited in the rock face just a few hundred years ago. Further tests would need to be carried out in order to completely clarify the age. However, the hammer is now owned by a private creation scientist, who doesn’t want to conduct further dating tests.

Before the hammer went into private hands, a number of tests were carried out on it. These showed that it was of good strength and made to a high quality. The hammer itself had been protected from rust by the iron oxide layer. Tests conducted in 1989 show that it was likely to have been made prior to the modern Iron Age, due to the presence of sulphur and chlorine in the item. Today’s hammers, available from sources such as Redashe ltd, would not contain such additives.

The explanation of how the hammer came to be deposited in rocks from the lower cretaceous period is not straightforward. However, there are other artefacts that have also been discovered amongst geological layers that pre-date the existence of the particular items or where there is no logical explanation for them.

However old this hammer turns out to be, it is certainly a prime example of how early man manufactured the tools he needed to survive. It also shows how the instruments we use today still have similarities with those first tools.